Recently, I took a Wi-Fi-related course in school, and now I am halfway through the semester. In fact, in the process of transitioning from “Wired Network” to “Wireless Network”, the transmission medium has changed from “wire” to “air”. "Many complex factors have to take into consideration in the IEEE802.11 network protocol specifically tailored for Wi-Fi. It is also a systematic summary of what I have learned.

However, this topic will mainly focus on IEEE802.11s, a network protocol specifically designed for wireless mesh networks.

“Mesh” which is referred to as Wireless Mesh Networks (WMN), is a network whose characteristic is that each node and neighboring nodes can communicate with each other.
The term Mesh originally meant that all nodes were connected to all other nodes, but most modern Mesh networks only connect a portion of the nodes.
Mesh networks can be considered as an upgrade of Multi-hop Ad-hoc networks, where each node also acts as a router that forwards packets to their intended destination on behalf of other nodes. The Wireless Ad-Hoc Network and Multi-hop are also very important and will be explained in a dedicated article later.
Mesh networks complement and improve the performance/cost of WPAN, MANET, WLAN, and WMANs.

Mesh vs MANET and WSN

As it can be seen from the table, WMNs offer a larger bandwidth and more diverse node mobility (either fixed or mobile nodes). Unlike MANETs, WMNs are generally supported by a structured network framework, which explains why most modern mesh networks only connect a portion of the nodes, since the nodes are still part of a traditional structured network, where the nodes connected to the Internet are generally called Gateway Nodes, which are illustrated later.

Nodes in WMN can be categorized into:

Mesh Router is functionally similar to the traditional wireless Access Point (AP), but mesh routing function can support communication between multihop nodes in wireless networks in a better way.

Mesh Client functions like a router in a Client WMN. There is usually only one wireless interaction interface.

According to the functionality of WMN, it can be categorized into the following 3 parts: 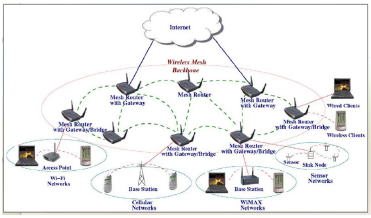 This wireless network framework can be configured self-configuring and self-healing for each Router, and the wireless links on the Mesh Router are generally heterogeneous, with one wireless network being used to connect to the overall architecture and the other to link the Mesh Client and Router.

The connection between Client Mesh is relatively simple, mostly peer-to-peer, and the network connected to the Client node typically provides routing and configuration capabilities for the user application. A packet of information will generally go through multiple hops from one node to the endpoint. 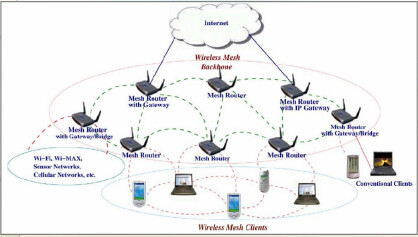 Hybrid WMNs are typically a combination of a Client WMN and an Infrastructured WMN. The Mesh Client is connected via Mesh Router or other Mesh Client. Most of the practical applications in modern life are based on this WMN architecture.

A further article will discuss the real-life applications of WMNs and the new IEEE802.11s protocol specifically for WMNs. In IEEE802.11s, the discussion will focus on the Hybrid Wireless Mesh Protocol (HWMP)